We make decisions all day, every day. We make big decisions often too. Sometimes, we have to make big, life-changing decisions – and those are a different beast. Decisions about your health, about switching jobs or careers, about friends and family are what I am talking about. Ones that actually are going to forever change your life. Decisions that if you choose wrong, you may never get a do-over.

I am fortunate that I haven’t had too many of these. A life changing decision done wrong, could have major consequences, you may hurt someone who loves you, you could never get back to what you had. On the other hand, you may choose right and reap the benefits of a new path in life.

I unfortunately had to make one of the hardest personal decisions of my life this week*. I won’t know if I made the right decision for awhile but a decision had to be made. I hope none of you are ever in the position I was in this week.

Over the last few days, I have thought a lot about not only my decision but decisions in general. Although I am not willing to discuss my decision this week because it was my own, I do want to talk about making large decisions.

Here are some of my thoughts on making life-changing decisions

So those are a few thoughts on making life changing decisions. They are usually never easy and often there isn’t a right or wrong, just what you choose. The worst thing you can do is not make a choice so you need to make one, own it and live on with it. Hope (if I post this) it helps someone, somewhere process something.

* No, I am not pregnant, I really wish everyone would stop asking me that. I think that is very personal and it is shocking how many people feel they have the right to ask if you are pregnant. It is ok to be married and not get pregnant right away. That is a whole other blog post though right?

** Please note I am not going through a big breakup. Adam and I are healthy and happy. I love him very much. I love being married to him and I couldn’t get through any of my big decisions without him.

Happy Patriot’s Day, a special little holiday just for Massachusetts and Maine. The holiday is also most notably, Boston Marathon Day. Some of the best runners in the world drop in to our little section of the planet and run their guts out.

I watched the elite men’s and women’s finishes via the live stream and both were so close. It was emotional watching them push past their bodies and minds, farther than most of us could ever imagine to break personal and world records.

The men’s winner from Kenya finished in 2:03:02, which is technically a world record but the Boston marathon isn’t classified as a ‘flat course’ so it won’t be recognized by the Guinness World Records.

The women’s race was a back and forth battle up to the last second (or two) and the US almost had their first women’s victory since 1985 but Desiree Davila was beat out by two seconds. She did break a record for an American woman on the course though. Also, American runner Kara Goucher came in fifth – she had a baby 7 months ago, ain’t no thing.

Congrats to all who ran, who are still running, who had family and friends in the race or who were there to cheer people on!

More Half Marathon in NYC

Two weeks ago now I ran the MORE/Fitness Half Marathon in NYC and I haven’t gotten to write about it yet. I think with the Boston Marathon still wrapping up, now may be a good time.

Adam and I headed to New York City for my third attempt at this race. I like this race for three big reasons:

The past two times doing this race I had a posse of women doing it with me. This year I was flying solo but I didn’t feel like backing out just because I had no one to play with, or panic with, or puke on.

The race went well. I beat my time at this race last year by over 20 minutes and I beat my Disney Half Marathon time by 10 minutes. My official time was 2:26:06.

The weather was 40s and sunny, which is much better than the two years prior. The first year we did the race it was a freak 93 degree day and last year it was 40s and 50s and down pouring rain the whole time.

The whole race went fine. We had so much snow this winter that training and doing all my long runs was really tough. I don’t think a long run on a treadmill even compares to a long run outside. So I felt like I didn’t train as much as I wanted but I felt stronger than I have the past few years. I also knew I had picked up a little muscle and gotten a little faster from participating in the Nor’Easter Running Group this winter and spring.

It wasn’t fun but I never thought I would walk or that I couldn’t do it. I did have one really low point for the 9th mile. I don’t run with a watch so I depend on the clocks at the event to keep an eye on how I am doing time-wise. I take the time on the clock as I pass it, subtract the minute that was on the clock when I crossed the start and then divide by however many miles I have done at this point. Yes, a watch may be easier but at least this gives me something to think about.

I must have done some very bad math at mile 9 because my calculations told me I was at the same pace as last year but I knew I didn’t have enough gas in the tank to go any faster for the next 4 miles. So I beat myself up pretty good in my head until about mile 10 when I did the math again and realized I was almost 20 minutes ahead of where I thought I was. From there on in it was not quite as sad.

Adam had a good spectating race, for those of you who were worried after the bagel incident of ’09. New York was great to us. We got to see lots of friends and eat some amazing food and I was proud of how my race turned out.

From here I plan on doing some local 5Ks, the Beach to Beacon and ending with the Disney Wine Dine Half Marathon in October. After that? Not sure. I still don’t have an itch to do a full marathon. I think I will just work on strength and time and get batter at these halfs. I like doing two a year, I think it has to keep me in check all year round.

Thanks for all your encouragement and support during my training and my race! The best reward so far hasn’t been weight loss, or strength or some weird love of running but it has been seeing how many of my friends and people I know start taking up running because they said I encouraged them to.

… and what it should teach us about how we use them now. 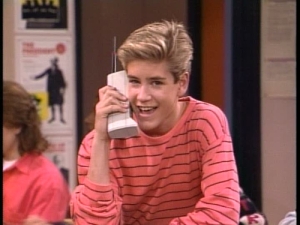 I have had a cell phone since 1999 or 2000. As new features are added, I upgrade. I was one of the first people I knew that texted, I had to be one of the first to have a picture phone, then an iPhone (and each iPhone upgrade).

I have my cell phone with me almost all the time. My iPhone is my calendar, my most used camera (and photo album), my most used video camera (and video player), my email, my social networks, my place to track my running distance and my entertainment (Angry Birds much?)… oh AND it is my phone, not that I use it for that often.

I will give myself a break on my phone though… I use it for me. I don’t answer personal calls at work, I don’t answer any calls when I am having dinner with my husband and I usually don’t text or take a call at all when I am in the company of other people. But I am very dependent on my phone.

Know what didn’t work in Aruba? Our cell phone (unless we wanted to pay a lot for it). How did we do it? How did we possibly survive? Well we did and it made me think a lot about how I use my phone, when I use my phone and who exactly is in control here.

Here is what we did without cell phones:

Six days after getting to Aruba we touched back down in the US, Philadelphia specifically. While we were preparing to land I told Adam I was excited to turn my phone back on. Then when we were taxing on the ground, I was a little apprehensive on turning my phone back on. It was the end of that silence, that stillness of not checking something or listening for a beep or a vibrate. I did turn it on and I am still going though emails, tweets, texts and Words With Friend’s moves even today.

I have tried to maintain a little bit more control over my phone, we will see how long that lasts. I have my ringer to silent and the vibrate off. When I look at my phone is when I want to, not when it summons me. I don’t know how long that will last, probably until I miss something important.

I do want to remember how that felt though. How we had to be creative, make plans, leave notes and trust our friends to communicate well with them for almost a whole week. It somehow made me feel more in control than perhaps if each person was just a text away.

How about you? Is your phone for you to keep in touch? or do you think it controls too much of you and your relationships?

*Names have been changed to protect the innocent.